With a passion for food, wine and culture, Mon Ami Gabi celebrates French classics, bringing them to Bethesda Row for all to savor.

We thank you for giving us a visit and we hope you’ll return, hungry for more. 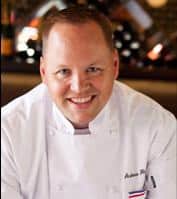 Executive Chef Andrew Fleischauer was born in Framingham, Mass., and grew up in Sudbury, a small town 40 minutes west of Boston. Growing up in a home where his family rarely ate out, Fleischauer initially became interested in cooking by helping his mother in the kitchen. As he grew older, he realized his culinary passion. After graduating high school, Fleischauer headed to Lehigh University where he earned a Bachelor’s degree in Business and Economics.

His heart was still in the kitchen though, which took him to Paris where he enrolled in Le Cordon Bleu. He graduated in 1996 with Le Grande Diplome, a highly acclaimed passport to the Culinary World, earned when a student successfully completes the Basic, Intermediate and Superior courses in both Cuisine and Pâtisserie. Upon returning to the U.S., Fleischauer began his culinary career in Boston and spent two years working at Le Meridien Hotel’s upscale restaurant, Julien, as a line cook. He then became the sous chef at the five-star, five-diamond restaurant The Inn at Little Washington in Washington, Va. Next, he became the executive chef at the Tower Club, in Tysons Corner, Va.

Eager to learn more about the restaurant industry, Fleischauer left the Tower Club after four years and headed to Bethesda, Md., where he has served as the executive chef of Mon Ami Gabi ever since.

More than just a meal, it’s an unforgettable exp

Making your own mocktail couldn't be easier! Learn

That end of week energy. 🍸

An evening to remember. ✨🥂 Thank you to every

What could be better than family, friends, & fine

Brunch isn't complete without the cocktails 🍸

This is your sign to try something new at Mon Ami

Match made in Vegas 💕 . Sip on our Paris Roman